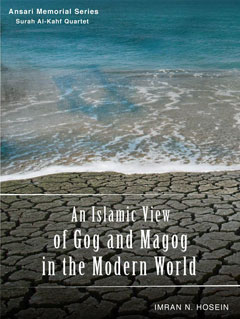 An Islamic View of Gog and Magog in the Modern Age

Apart from minor editing, the only significant change from the first edition is our identification of Gog and Magog. In the first edition of this book we came to a premature conclusion which identified Gog with the Anglo-American-Israeli Zionist alliance and Magog with the Russian-led alliance. We now hold a different view. We now believe that Gog and Magog are present in both the Anglo-American-Israeli and the Russian-led alliances, and are leading them both to a mighty clash that will result in their mutual destruction as super-powers. However, it is important to note that Gog and Magog will survive that clash and will then use their power to so empower Israel that Israel can be firmly established as the ruling State in the world.

Islamic scholar Imran N. Hosein spent 15 years studying the subject of Gog and Magog. He then devoted himself to ten months of continuous effort in order to write this ground-breaking book on ‘An Islamic View of Gog and Magog in the Modern World’. Despite the fact that he earns his modest livelihood from the sale of his books, he promptly put the entire text of the book on this website for free download around the world. As a consequence thousands appear to have already read and benefited from the book during the three weeks that it has been available on the internet.

Readers can show their appreciation for the value of his scholarly work by ordering copies of the printed book.
Buy print copy online

I began my study of Gog and Magog more than fifteen years ago in the early 90’s while resident in New York. My subsequent public lectures on the subject never failed to provoke keen interest from my Muslim audiences in several parts of the world. The evidence and arguments presented in the chapter on Gog and Magog in my book, ‘Jerusalem in the Qur’an’, succeeded in convincing many who read the book that we now live in a world dominated by Gog and Magog. They were easily convinced that the ‘town’ mentioned in the Qur’ān in Sūrah al-Anbiyāh’ (21:95-6) was Jerusalem and hence, that Gog and Magog (and Dajjāl) explained the ominously unfolding ‘war on Islam’ with slaughter and destruction of Muslims in so many parts of the world. As a consequence, such readers also understood Israel’s mysterious imperial agenda, and many have been making efforts to extricate themselves and their families from the embrace of Gog and Magog – an embrace that will take 999 out of every 1000 of mankind into the hellfire.
Despite my best efforts, however, I failed miserably, again and again, to convince my learned peers, the scholars of Islam, that Gog and Magog were even released into the world. I earnestly hope and pray that this book might make a difference Insha’ Allah.
Download Ebook ( PDF 1.4MB )
Right click and choose “Save As” to download.